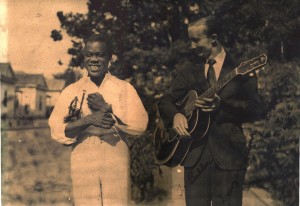 Snoozer Quinn was an early jazz banjoist and guitarist from Bogalusa, La., whose contemporaries were Eddie Lang and Lonnie Johnson. The golden years of his career, from 1925-1932, were mostly spent with territory dance bands touring throughout the South and Southwest, like the Paul English Traveling Shows, Peck’s Bad Boys, the St. Louis Rhythm Kings, the Louisiana Ramblers, the Mart Britt Orchestra, and Robert E. Lee and His Confederates.

Snoozer also played with renowned musicians like Paul Whiteman, Louis Armstrong, the Dorsey brothers and many other leading musicians of the 1920s and 1930s. But he rejected the “big time” scene of New York in favor of staying in the South. Consequently, Snoozer is less well known than his peers, and certainly, he recorded less than his peers.

Snoozer was working mostly before the era of amplification and the widespread acceptance of jazz guitar as a lead instrument. Solo recordings he made for Victor Records in 1928 were never released, and have been lost to time. (Just think…. The solo recordings of one of the first and best jazz guitar soloists could be sitting in a vault somewhere, gathering dust. I am always searching.)

Quinn would have faded into obscurity were it not for Johnny Wiggs who, in 1949, captured Quinn’s solo guitar jazz style for posterity. Quinn was in a tuberculosis ward at New Orleans’ Charity Hospital when Wiggs recorded him, shortly before he died at age 42. Even today, the performance of a dying man gives pause to musicians who wonder how he achieved his unusual sound. These recordings are vital to Quinn’s legacy, and that they only offer a hint of his talent and technique is both marvelous and tragic.

Snoozer had a wonderful life in terms of travel, adventure, good friends and people who loved him, but he did face many challenges. His head was slightly misshapen from birth, and he suffered from alcoholism and tuberculosis. Music was where he found his joy on earth, and he was amazing.

Over time, I hope to share Snoozer’s story and his music with the world.