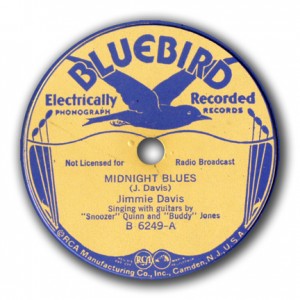 There are very few audio recordings available of Snoozer Quinn.  To modern day finger-style guitarists, the discovery of new recordings of Quinn would be, to quote Al Rose (and with respects to Jake Booze), “roughly the equivalent of telling Van Cliburn that you’ve found a Franz Liszt piano roll.”

There are many unresolved issues in Snoozer’s recording career. His known discography, compiled by Brian Rust and later added to by Tor Magnusson and Don Peak for the Jazz Archivist, reflects that “Snoozer Quinn made quite a number of recordings.”  Tragically, many of these recordings were never released and are now lost – such as solo sides recorded for Victor in 1928 and a session with Bix Beiderbecke and Frankie Trumbauer recorded for Columbia in late 1928. Of the recordings that are available, Snoozer is playing as accompaniment in big orchestras or to vocalists like Bee Palmer and Jimmie Davis.

Thankfully, Johnny Wiggs, a cornetist, New Orleans public school teacher, and Snoozer’s old band mate,  recorded Snoozer just before he died. These records, now on file in the Louisiana State Museum at the U.S. Mint, and available for listening here, were made in 1948 (Snoozer died in 1949) in the tuberculosis section of New Orleans Charity Hospital. Snoozer was weak and would die soon after. Though the setting was distracting and the recording equipment was amateurish, these recordings of Snoozer Quinn give us some glimpse of his talent. Say Magnusson and Peak, “Quinn’s 1948 recordings are of very high class, and if he could play that well at the end of his life, and in the later stages of tuberculosis, then he must have been exceptionally good in his prime.”

This entire session was eventually released as an LP record album by a small jazz label called “Fat Cat Jazz Records” out of Manassas, Va. The Legendary Snoozer Quinn with Johnny Wiggs received a rating of five stars in a record review in Down Beat in 1969.