It’s official! We are finally debuting never-before-released silent film footage of Snoozer Quinn that is housed in the archives at the Louisiana State Museum. The film was recorded by Charles Peterson,  a guitarist/banjoist with Rudy Vallee’s Connecticut Yankees who later became a well-respected jazz photographer. Charles’s son Don Peterson helped me definitively date the film to 1932. Says Don:

“This was a 50 or 100 foot roll of 16mm film and was shot as a home movie, rather than as a professional piece. The location was our rural home in Laurelton, NJ – about 4 or 5 miles from Point Pleasant, an ocean-front community. My parents had just purchased the farm (it was 50 acres, mostly of pine woods) as a retreat from their permanent home in Manhattan.”

Working with the La. State Museum,  we received a grant from the National Film Preservation Foundation to have the film digitized. The accompanying photographs are stills taken from the film footage. For those of you who’ve seen the Fat Cat LP “The Legendary Snoozer Quinn,” these image will be familiar.

Although the film is brief (about 2 and a half minutes) and silent, it’s an extraordinary opportunity to observe the playing technique of Snoozer Quinn. In 1932 Snoozer would have been 24 years old and in his prime — and already a vet of the Paul Whiteman Orchestra. It’s so exciting to watch him play!

Foots Quinn, Snoozer’s nephew, will be in attendance. There will also be on display some photographs, instruments, and other mementos associated with Snoozer. The event is free and open to the public. A cash bar reception will help raise funds for the ongoing preservation of films and sound recordings in the museum’s jazz collection.

In this 1/21/1954 edition of the Elyria Chronicle Telegram (Ohio) you see that the writer, John Lester, says that Paul Whiteman once proclaimed Snoozer Quinn the eighth wonder of the world. I wonder where Lester got his information?

I am in search of ANY primary source that features Whiteman’s thoughts on Snoozer Quinn. Les Paul has discussed Whiteman’s observations on Quinn in certain interviews, and there exist second- or third-hand references such as this implying the great respect Whiteman had for Snoozer’s ability. But I would love to find something more concrete…. letters, memoirs or interviews with Whiteman. Perhaps there is a Down Beat or Metronome interview with Whiteman out there that has observations on Snoozer? I’m slowly digging. Please let me know if you ever encounter anything like that.

A few years ago, I did access the scrapbooks that are part of the Whiteman Collection at Williams College, but no luck there. 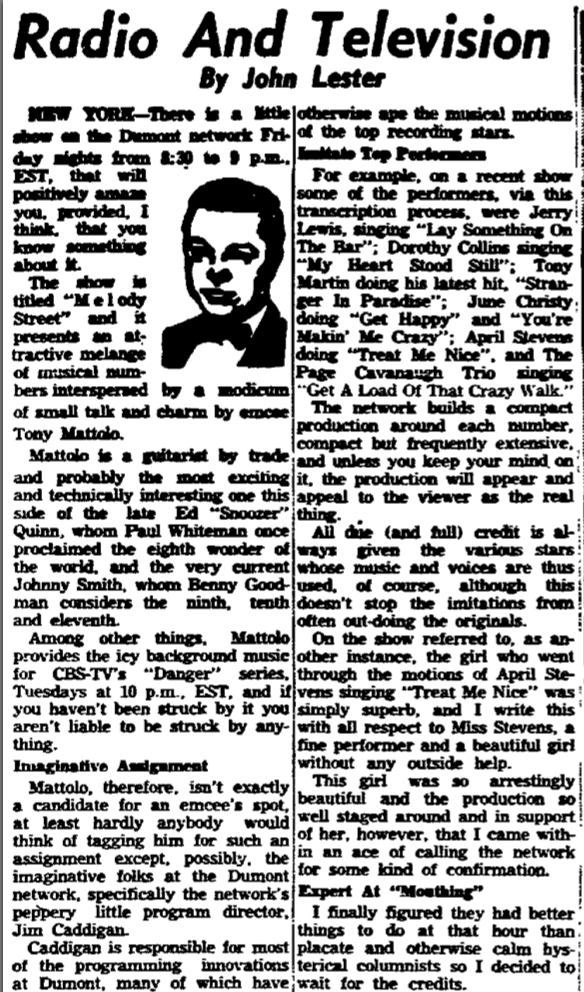