Enjoy this amazing silent film of Snoozer Quinn from 1932, when he was in his prime at the age of 25 years old. He joined Paul Whiteman in fall 1928 and was active for several more years. Things to look for while watching this film:

The film was recorded by Charles Peterson,  a guitarist/banjoist with Rudy Vallee’s Connecticut Yankees who turned into a jazz photographer. Charles’s son Don Peterson helped me definitively date the film to 1932 and says the location was Laurelton, NJ at their country home. Here is a photo from that same day. This is a picture of little toddler Don looking at Snoozer’s guitar. 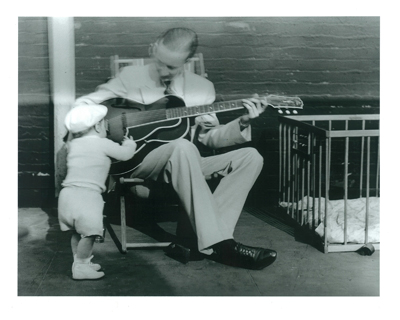 Snoozer Quinn and Don Peterson in 1932. Photo by Charles Peterson.