Godfrey Hirsch: Did you ever do anything on Snoozer Quinn?

Curtis Jerde: Do anything? You mean, interview him?

Frank Netto: Well you couldn’t interview him because he died before…You got any record… He died of TB in Charity Hospital.

Godfrey Hirsch: You have any information on him?

Godfrey Hirsch: I think he was from Bogalusa. I think that was his home.

Curtis Jerde: I’m not sure if it was Bogalusa. F

rank Netto: But it was yeah, it was right across the lake somewhere.

Godfrey Hirsch: But he was a fantastic guitar player.

Godfrey Hirsch: He was a fantastic guitar player. He was with Whiteman.

Frank Netto: He had that side head there… his head was out of shape.

Godfrey Hirsch: He was with us out at Suburban Gardens with Earl Crumb. And he was just sitting up there just playing between sets, not with the band. He couldn’t play with the band.

Curtis Jerde: He couldn’t play with the band?

Godfrey Hirsch: Not well, no. Because I mean, he was not a chord player. He was a picker.

Frank Netto: Well, he played on “off band” with Whiteman for years.

Godfrey Hirsch: No, no.

Frank Netto: He was an intermission player

Frank Netto: I notice these bass players with the, the electric bass players today? They do that. You can see them around, they press the t fret down and the note will come out and they regulate their volume that way.

Godfrey Hirsch and Frank Netto were interviewed by Curtis D. Jerde and Richard B. Allen on November 10, 1986 in New Orleans, La. Courtesy of the Hogan Jazz Archive at Tulane University

(May 23, 2022, New Orleans, LA)— For the first time ever, a book devoted to exploring the biography and musicianship of the enigmatic early jazz musician Snoozer Quinn has been made available to the public. Snoozer Quinn: Fingerstyle Jazz Guitar Pioneer, written by Katy Hobgood Ray and Dan Sumner, with a forward by Steve Howell, publishes on June 6, 2022, by Out Of The Past Music, LLC and BookBaby. Available in paperback (104 pages) and eBook, the book is available at snoozerquinn.com/book and on Book Baby and other online retailers. For bulk orders, contact Baker & Taylor.

Since his passing in 1949, the legend of Edward “Snoozer” Quinn and copies of his rare deathbed recordings have been passed along through generations of serious guitarists like treasured secrets of an exclusive society. Truly a musician’s musician, Snoozer’s marvelous abilities have been extolled by his contemporaries who heard him play, and those who came after — including such luminaries as Les Paul, Eddie Lang, Danny Barker, Frankie Trumbauer, and Bing Crosby.

I met Quinn, the only boy who has it on Eddie Lang, I believe. – Frankie Trumbauer

Snoozer Quinn is the best of all time. – Danny Barker

I visited Snoozer at his house…. That’s where I learned to pull and hammer strings. – Les Paul

Who was this mysterious virtuoso Snoozer Quinn, and what is his place in the history of jazz guitar? He performed with Paul Whiteman, Louis Armstrong, the Dorsey brothers and many other leading musicians of the 1920s and 1930s, as well as country musician Jimmie Davis. But disfigured from birth and plagued by illness, Snoozer Quinn rejected the “big time” and lived out his short life in rural Louisiana. Working mostly before the era of amplification and the widespread acceptance of jazz guitar as a lead instrument, solo recordings he made for Victor Records in 1928 were never released.

Quinn would have faded into obscurity were it not for Johnny Wiggs who, in 1949, captured Quinn’s solo guitar jazz style for posterity. Quinn was in a tuberculosis ward at New Orleans’ Charity Hospital when Wiggs recorded him, shortly before he died at age 42. Even today, the performance of a dying man gives pause to musicians who wonder how he achieved his unusual sound. These recordings are vital to Quinn’s legacy, and that they only offer a hint of his talent and technique is both marvelous and tragic.

The 1949 deathbed recordings became digitally available for the first time in 2014, at last making Quinn’s music available to a worldwide audience.

Today, with the release of the book Snoozer Quinn: Fingerstyle Jazz Guitar Pioneer, Quinn’s life story is finally brought to light, along with an explanation of his pioneering style.

“Snoozer employed a unique approach to guitar technique to achieve the illusion of multiple guitars playing at once,” says co-author Dan Sumner, a Louisiana-based guitarist, arranger, educator, and music producer. “He played with the fingers of his right hand, not with a pick. His right-hand technique seems to have its roots in the country blues tradition rather than the classical guitar tradition…. he used combinations of adjacent open strings (usually diatonic to the key, but not always) as a way to keep the harmonic rhythm moving while he was shifting his left hand to a different playing position.”

Sumner includes eight transcriptions of Snoozer’s featured solo work from the hospital recordings, in notation and tablature, as well as discussion of Snoozer’s guitar technique, chord voicings, and musical language.

Quinn’s biography was written by Katy Hobgood Ray, his relative and fellow Bogalusan. Hobgood Ray constructed the biography through years of archival research, interviews, and family history. Also included are photographs, a discography, and a section of historical first-person interviews with Snoozer’s friends and fellow musicians, who offer further insight into his abilities and personality.

“I hope that this release of the hospital recordings and this book will bring about more interest in Snoozer, whose legend for too long has been shrouded in mist,” says Hobgood Ray. “I am grateful to Dan Sumner and Steve Howell of Out Of The Past Music for dedicating themselves to preserving Snoozer’s legacy along with me. We hope that Snoozer’s music brings joy and wonder to others, as it has to us.”

Louisiana-based arranger, educator, and music producer Dan Sumner is an internationally acclaimed guitarist who performs and tours the world regularly with a variety of acts. He is a sponsored Benedetto Artist and owns and operates Fort Sumner Studio in Monroe, Louisiana, where he has recorded and/or produced dozens of critically acclaimed albums. He has taught music at Loyola University (New Orleans), Indiana University, Capital University, was Assistant Professor of Music Education and Guitar at University of Louisiana – Monroe and was the music director of the Kennedy Center Award-winning Lusher Charter School. He holds degrees in Jazz Studies and Guitar from Capital University, the New England Conservatory of Music with Doctoral studies at Indiana University Jacobs School of Music.

Born in Bogalusa, raised in Shreveport, and now living in New Orleans and Memphis, Katy Hobgood Ray has been chronicling Louisiana arts and culture since 2000. She worked as a radio host and content producer for NPR’s Red River Radio, and since 2014 has hosted the kids’ radio show and podcast “Confetti Park.” As a songwriter and musician, Katy is active in multiple genres including country blues, jazz, and Americana, and has performed at such festivals as the New Orleans Jazz & Heritage Festival, French Quarter Fest, the Folk Art Fest, Mid-City Bayou Boogaloo, Beignet Fest, Creole Tomato Fest, and Fête Française. She plays music with the New Orleans-based children’s chorus Confetti Park Players and the Shreveport-based Friends of Lead Belly. Katy is the foremost scholar on the life of Snoozer Quinn, an early jazz guitarist and her relative. She holds a bachelor’s degree in English from Carleton College and a master’s degree in musicology (with an emphasis in New Orleans music) from Tulane University.

East Texan Steve Howell’s guitar playing and singing are very much rooted in the traditional jazz and rural acoustic blues genres born in the American South. His musical interests also extend to rhythm and blues, pop music from the 1950’s and 1960’s, and rock ‘ roll. His interpretations of tunes from these genres have been enjoyed by audiences in Texas, Louisiana, Arkansas, Oklahoma, Tennessee, Oregon, and Great Britain for over forty five years and lauded by critics from the United States and Europe who have unanimously praised his unique approach to breathing new life into time-honored songs from days gone by and reintroducing little-known gems of American music to a whole new audience. He has released ten CD’s and was the recipient of the Texas Music Academy’s 2011 Historical Significance Award. His recordings are in steady rotation on radio playlists in the United States, France, Italy, Germany, Belgium, The Netherlands, Switzerland, Poland, Greece, Croatia, and Australia and on XM and WorldSpace satellite radio. “Fingerpicking Early Jazz Standards,” a set of fifteen of his fingerstyle guitar arrangements has been published by the Hal Leonard Corporation in 2018.

The new Jazz Archivist from Tulane University’s Hogan Jazz Archive is out!

It includes an update on the Claude Blanchard research project. Over the past two year I’ve taken a break from serious archival research to focus on creative projects, but I’ve done some research-related travel and interviews on the side. I’ve gathered some very special historical documents from Claude Blanchard’s descendants, including a scrapbook. This article (“Claude Blanchard’s Orchestra and Affiliates in Texas: An Update on the Ongoing Research”) discusses some of the research in 2014.

Thanks to Lynn Abbott for encouraging me to finish this article, even though the research isn’t finished. (I’ve come to realize the research is never finished.) But maybe someone out there will find something useful!

You can read the article below. Look at past issues of the Jazz Archivist here. 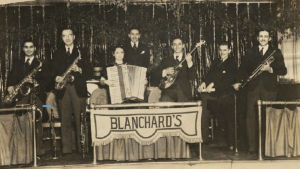 I got this via email today, and thought I would help spread the word….

The Jazz Education Network Research Interest Group (JENRing) is embarking on a mapping project to better understand the scope of jazz research worldwide and to facilitate collaboration and coordination among jazz researchers. The goal is to create a central site with resources for publications and personnel as well as communication tools among researchers and practitioners worldwide.  We would like to invite you to get involved in this effort. If you have published any research that may be relevant for the jazz field, we would like to know about it. Please fill out our survey here: https://www.surveymonkey.com/s/jazzmap and feel free to share the link with fellow jazz researchers.

Please feel free to contact me any time with further suggestions, to join JENRing, or further resources to share.