I have this fantastic doodle of Snoozer Quinn, “Boy Wonder,” playing the banjo that is so fascinating. For one thing, I love the little details that, if this is an accurate caricature of his personage (and I bet it is), bring him to life: 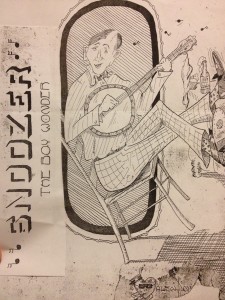 From a musical standpoint, this cartoon is pretty important because it looks to me like he is playing a four string tenor banjo. I’d love to know what you think…. please shoot me an email if you have some insight. I know, I know… it’s just a cartoon and we can’t be sure that the cartoonist knew to be faithful to the instrument.

But, this is still significant because no photographs or in depth descriptions of Quinn playing banjo have been found — this is all I’ve found so far. It’s known that Quinn played banjo in his early career, in his high school band, in dance bands and in minstrel shows. As late as 1926 he was hailed by Houston radio station KPRC as “Dixie’s Banjo King”. and “Dixie’s Premier Banjoist.” It would be useful to know what kind of banjo Quinn played and how he tuned it.

And here is another mystery… who was the cartoonist? The piece of paper is torn just where the signature is, but the little icon with it is so unique that there must be a way to trace it. Look close — it’s a cute lil’ masked heart man playing the clarinet. 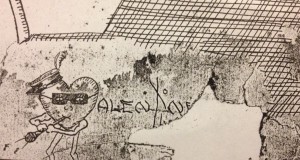 I contacted Rex Rose, son of Al Rose, who was a known cartoonist and who was a BIG FAN of Snoozer’s. (In fact, Al wrote the liner notes to the Fat Cat LP of the Wiggs/Quinn hospital recordings.)

He took a look and said he doesn’t think it’s his father’s work. Mystery still unsolved. Any ideas, universe?

(It occurs to me to look through 1920s-era Houston newspapers for cartoonists’ names… scurries off.)